I am standing on a railways platform in the middle of the night. It is the beginning of winter, I am wearing a sweater but it it feels much colder, I am freezing to my bones. There are very few people on the platform but police everywhere. Who are they protecting? The train pulls up. The cold wet rusty sound of metal on metal lowers the temperature further. Policemen get into the train, going from compartment to compartment, closing the windows. The metal shutters fall down with staccato sounds, like gunfire far away.

I am watching all this on the big screen and I am mortally scared. It is 1984 and I am at one of the most dangerous places on earth at the time. Two men on the railway platform want to board the train which is going to Amritsar, but empty. They are desperate to get to Amritsar , but we don’t know why. It is enough that we feel their difficulties and desperation.

A man carrying a sleeping girl child in his arms is walking through misty fields in the middle of the night. He is with his wife. They are trying to cut through the vegetation to find a short cut to their ancestral village. The wife is dog tired after a long journey from the city and they are lost. Are there gunmen in the field who will slaughter this family because they happen to not be Sikhs, because that was what was happening in Punjab at that time. There is little scope for reasoning. The tension is so thick that you can cut it with a knife in the cold Punjab night.

Again I shrivel up in my seat with fear. Pictures of busloads of people slaughtered at random float up in my memory. I had seen them in the newspapers when I was seven years old. On frequent nights the news on state run TV will talk about another such massacre and our joint family of 15 people eating dinner in distant Kolkata would fall silent at the madness unfolding in faraway Punjab, that none of us had ever visited. These things don’t bother us anymore. We can change channels now, we have remote controls, we have Bollywood starlets dancing for us 24×7. Life is comfortable. There is Facebook if we get too worked up. 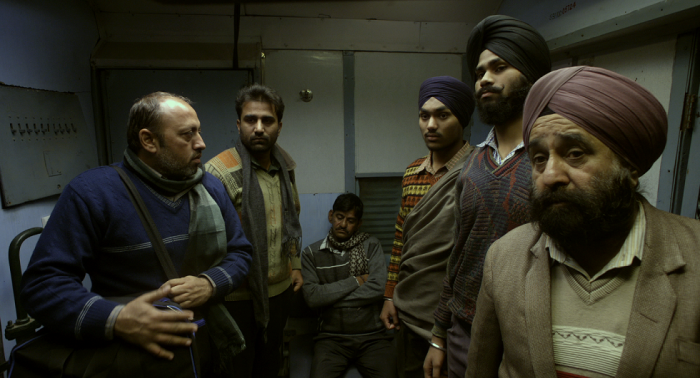 The man lost in the fields musters up the courage to call for help from the only house that stands in the fields. Is there death inside that house? We don’t know. The door opens and we meet Joginder and his mother. These families have known each other for long. Militancy is yet to fully destroy the age old social fabric. After Joginder has escorted the lost family to safety we see him lying in bed, staring at the ceiling. A lone gunshot rings out somewhere in the distance. His dog Tommy starts to bark.

Tommy needs to be silenced. His barking can give away the militants hiding in the fields to the police. Joginder is torn between his love for the dog and the practical need to put him down. We meet the faceless militants, they appear to be decent people, men of God, increasingly radicalised by the excesses of the armed forces. Joginder and his old mother find it difficult to take sides, they are perhaps as tired of the situation as a family in Kashmir is today, just yearning for normalcy to return.

Chauthi Koot transports us to a time whose memory is beginning to fade from our collective consciousness. As I sat in the theatre watching this film I felt the odd mix of dread and exhilaration that one does when watching a good horror film. Gurwinder Singh announced his arrival on the Indian Cinema stage with his superb Anhe Ghore De Daan( Alms for a Blind Horse)  and Chauthi Koot confirms that he is master of the medium. This is not an easy film to watch with its deliberate pacing and deconstructed narrative yet I felt my fingers tapping my knee to the rhythm of cinema as if in a concert hall.

The film excels in almost all departments. The sound design is completely exceptional and firmly proves that cinema is an audio visual medium. Ultimately film is a mediation on time and space and Chauthi Koot creates a stifling experience of Punjab in the early 1980’s. Gurvinder Singh does not take the easier path of falling back on story and takes his time to extract every ounce of emotion from the scenario. The filmmaker is a protégé of the late Mani Kaul who in turn was a formalist in the vein of Robert Bresson. Perhaps there is a trace of Au Hazard Balthazar in Chauthi Koot. Gurvinder Singhs use of a mute animal like Tommy who barks, as is his fundamental nature, is akin to Bressons memorable donkey. The technique of milking pure emotion by using elements of nature and juxtaposing it with banal human behaviour is deployed here in a clinical way.

Along with Chaitanya Tamhaney’s Court , Chauthi Koot heralds the birth of a new set of master Indian Filmmakers who will inherit the mantle from our aging stalwarts. I watched the film at the Singapore International Festival and this is a film for which I changed my travel plans. Some films are worth waiting for, Chauthi Koot is worth travelling for.